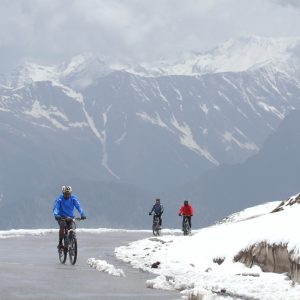 For thousands of years, the stupendous mountains of the Great Himalayas have been fascinating people across the globe. Its snow-capped peaks, gorgeous valleys, milky-white glaciers, rivers, and rich vegetation—the Great Himalayas are a profound representation of pure beauty and magnificence. The word ‘Himalaya’ begets its name from two Sanskrit words – Hima, meaning “snow” and alaya, meaning “abode” – or the abode of snow.

HERE ARE 5 HIGHLIGHTS TO THE HIMALAYAS 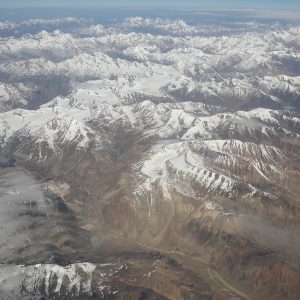 An amalgamation of innumerable mountains, the Great Himalayas were formed many million years ago. To the east of this majestic range lies the Hengduan Range, which also comprises of the Three Parallel Rivers National Park in China. However, on its western front, it connects to an expansive high ground known as the Pamir Knot. The Karakoram Range runs parallel to the Himalayas in the eastward direction, while the Hindu Kush Range runs in the southwest direction along with the Tian Shan Range touching the north. 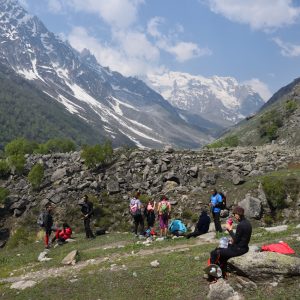 Mount Shivling: This is one of the prominent ranges of the Himalayas. As an integral part of the Garhwal region, near Mount Meru, Mount Shivling serves as a popular Hindu pilgrimage site today. It stands at a height of 6,543 meters and has derived its name from Shiva Linga, a representation of Lord Shiva.

Mount Dhaulagiri: Translating to “the dazzling white” in English, Nepal’s Mount Dhaulagiri is evidently the world’s seventh tallest peak (8,167 meters). It’s also known for forming one of the deepest canyons in the world — the Kali Gandaki River Gorge — alongside Mount Annapurna I.

Mount Kanchenjunga: Sprawling on the borders of Nepal and India, the 8,586-meter high Kanchenjunga is the third tallest mountain in the world. 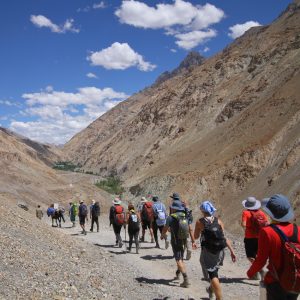 Most towns nestling in the Himalayas are easily accessible via road, and some even by train and plane. However, many of the underdeveloped rural areas can only be reached by foot.

The southern part of these majestic mountains lies in the Indian sub-region and hence, can be accessed via the Indian routes. The western parts lie with Pakistan and Afghanistan, the north in Tibet and the rest of the region is shared between Nepal and Bhutan. 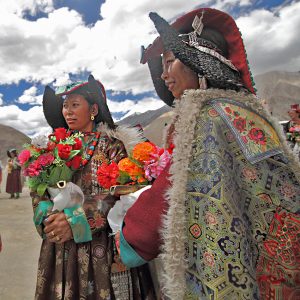 The Great Himalayas serve as a home to a diverse variety of people, religions, languages, and cultures. In general, Hinduism is more prevalent in the southern edge of the Himalayas, Islam in the west, and Buddhism in the north. People across the entire region speak a variety of languages, including Hindi, Urdu, and Nepali. Yet their written language dialects are quite different. Many regions across the Himalayas hold religious significance in Buddhism, Jainism, Sikhism, and Hinduism. For example, Paro Taktsang is an important religious center in Buddhism. It is said that it is the very place where Padmasambhava founded Buddhism in Bhutan. Padmasambhava is regarded as the patron saint of Sikkim. In Hinduism, the Himalayas are personified as the king of all Mountains – “Giriraj Himavat,” the father of Goddess Ganga and Goddess Parvati. Several Vajrayana Buddhist sites established in the Himalayas in India, Tibet, and Bhutan also justify the region’s religious importance. As per some of the latest stats published on the internet, there are nearly 6,000 monasteries in Tibet. Bhutan, Sikkim, and Ladakh that follow the league. The Tibetan Muslims too have their own mosques in Shigatse and Lhasa. 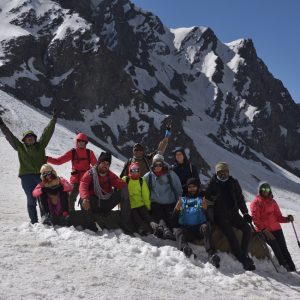 The latitudinal range of the Great Himalayas spans across the tropics in the southern region to about 40 in the north (Chicago latitude) of the Pamir Knot. However, the weather in the Great Himalayas is more severe than other regions located at similar latitudes. This is particularly due to the high altitude and the lack of water bodies in surrounding areas to subdue the climate. A major chunk of the Himalayan peaks are snow laden all year long, which makes the region colder than the others.

Further, one can witness large variations in micro-climatic conditions throughout the region. For instance, two valleys adjacent to each other (just a couple of miles away), but isolated by the mountains experience different climates either because one is getting more sunshine than the other or they are affected differently by the blowing winds.

At Unventured, we aim to offer excellent and well-crafted excursion packages, which promise a memorable experience. Our team of qualified professionals and passionate tour guides bring you closer to the region with help of their carefully handpicked local, knowledgeable hosts that make your visit to these majestic mountains an experience worth remembering.