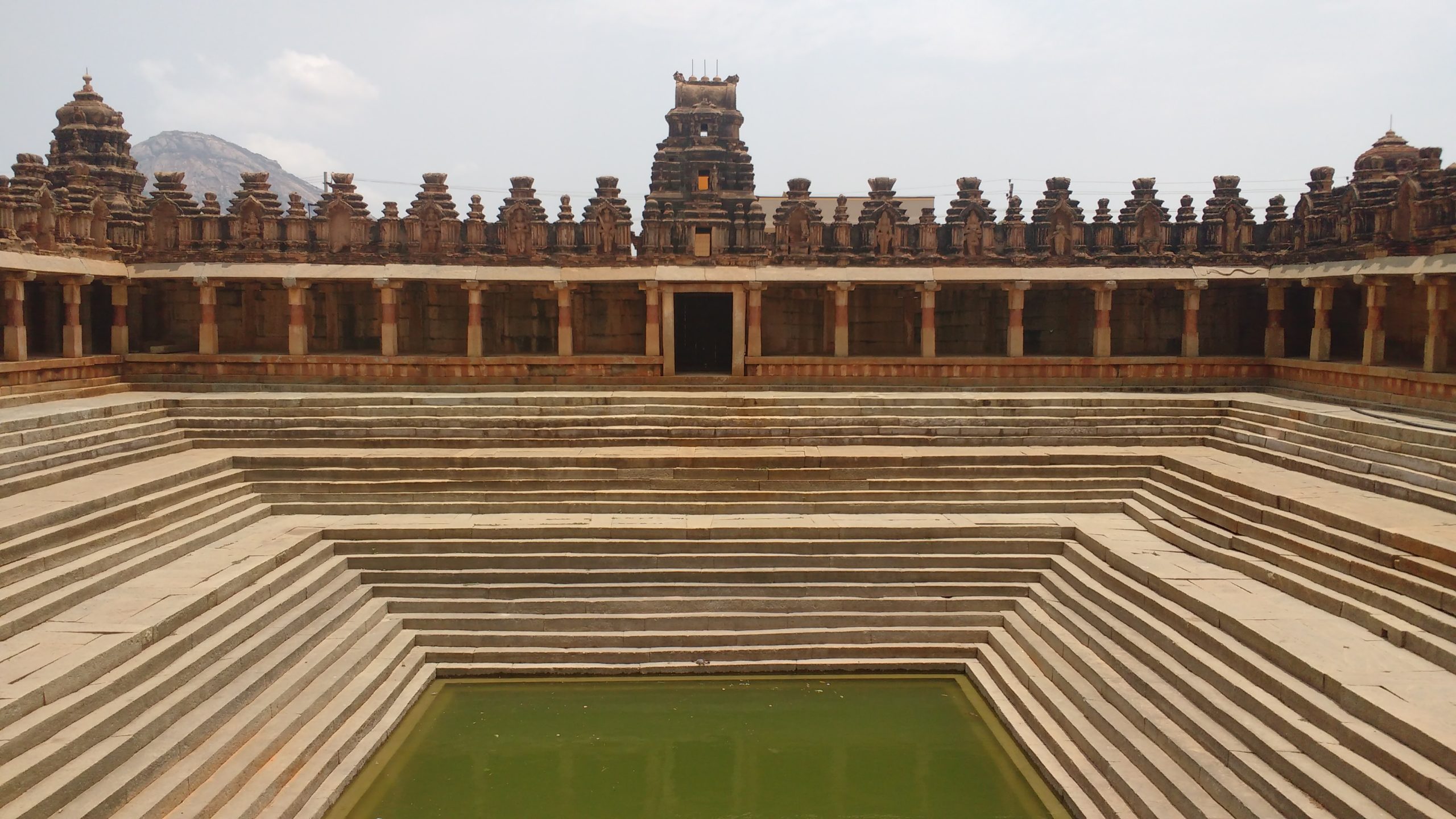 Must visit Temples in Bengaluru

How much ever clichéd the statement- ‘Hinduism is not a religion, but a way of life’ might sound, it definitely holds true to the word. It was always a way of life, devoid of temples and idol worship. However, as Hinduism evolved over the centuries, temples, idols and temple architecture became an integral part of the same. Interestingly a typical Dravidian style temple has its architecture correlated to the human body and its “ckakras” or energy points. As much as temples were a place for worship and spirituality, they were also a space for social gatherings. Until a few centuries ago, travellers could halt at temples, refresh themselves and were fed by the priests. Over the years the temples have transformed as solely a place of worship to pay obeisance to the gods.

Though Bengaluru derived its name from Benda-kalu-ooru (land of boiled beans) in the 12th justifyduring the reign of Hoysala empire, the city was built much later in the 16th century by Kempe Gowda, a local chieftain. Apart from the roads, cantonment, fort and markets, Kempe Gowda also played a major role in the construction of various prominent temples in Bengaluru. Someshwara temple in Halasuru is believed to be the oldest temple in Bengaluru dating to 9th century when the city was under the Cholan dynasty. Legend says that Kempe Gowda during a hunting expedition was tired and fell asleep under a tree. The local deity Someshwara appeared in his dream and instructed him to retrieve a treasure and build a temple in his honour. The chieftain followed the sayings in his dream and also built Someshwara temple over the existing one. Various kingdoms from Marathas to Wadiyars later ruled the city, and numerous temples were built with each of these kingdoms bringing in their style of architecture.

Some of the prominent temples of Bengaluru are below:

Built in 1537 CE under the rule of Kempe Gowda, Bull temple is probably the most popular temple in Bengaluru. The main deity is a large monolithic structure of Nandi (bull), which also is the largest bull structure in the world. The legend goes that the Bull Temple was built to appease a bull that used to consume and destroy all the groundnuts and peanuts cultivated in this area. It is also said that after the temple was built, the bull stopped damaging the crop. As a celebration of this incident, the farmers of Basavanagudi organized a Groundnut Fair (Kadalekai Parase), near the temple, which continues till date.

On our ‘Good Morning Bengaluru’ and ‘Bengaluru in a Nutshell’ trail we share deeper insights into the makings of this and a few other temples, their quirky pieces of history and culture best known to the locals and off the guide book. 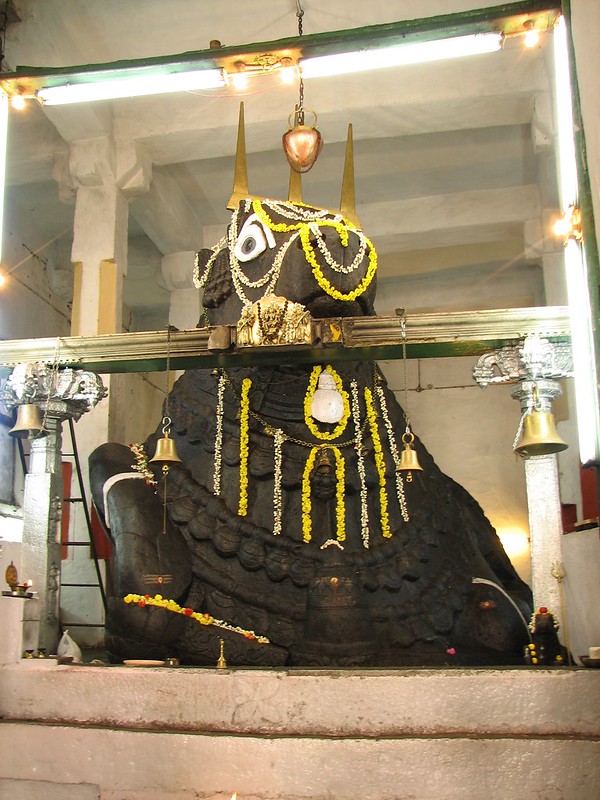 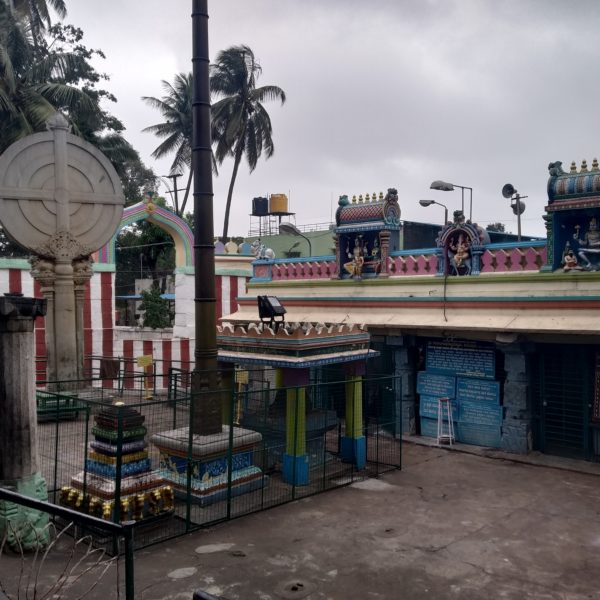 This ancient temple dedicated to Shiva was cut out of a monolithic rock probably in the 9th century. The main shrine houses a Shivalinga, and Shiva is worshipped in the form of the one who adorns the river Ganga, and hence the name Gangadeshwara. One needs to take a small flight of steps to go down and reach the sanctum, and then crouch to walk around the sanctum. In the forecourt stands two monolithic structures- Suryapana and Chandrapana, each consisting of a massive disc atop a supporting pillar, like giant stone lollipops.

Dating to the 17th century and built during the time of Vijayanagara dynasty, the temple is dedicated to Venkataramana, a form of Vishnu. The temple displays a typical Dravidian and Vijayanagara style architecture. The vestibule houses numerous sculptures of various mythological figures and gods, and the inner hall is adorned with beautifully carved pillars.

To explore this temple in detail, do join Unventured on ‘Pete Walk- Bengaluru through its markets’ tour. 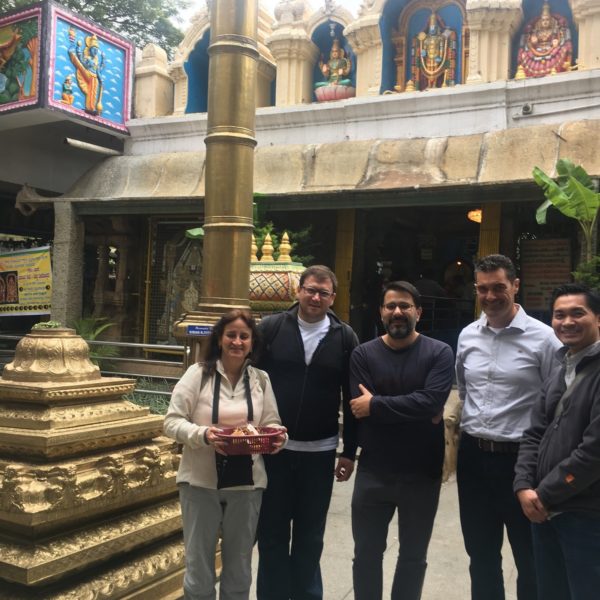 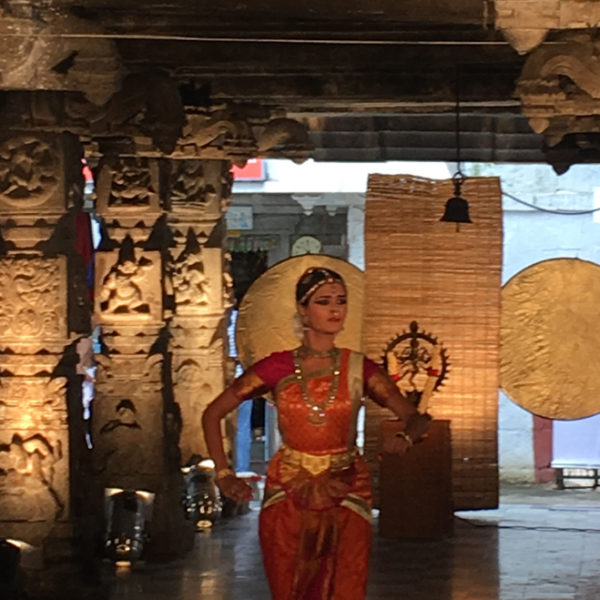 The colourful gopurams or entrance gates are quite an eye catcher at Someshwara temple, considered to be the oldest temple in Bengaluru. The main hall is another attraction with carvings at this temple built in Dravidian style architecture. Dedicated to Shiva, the temple was initially built during the times of Cholan empire in the 9th century. However, the founder of Bengaluru, Kempe Gowda in mid 16th century, modified the temple and built the present structure.

Built by the Thigalas, an agricultural community, Dharmaraya is believed to be more than 800 years old, and is one of the oldest in the city. Located amidst the hustle bustle of Bengaluru markets, the architecture of Dharmaraya temple is a blend of Western Ganga, Pallava and Vijayanagara styles. The way Greek mythology unravels its stories through the epics- Illiad and Odyssey, Hindu mythology revolves around its two prominent epics- Ramayana and Mahabharata. The main characters from Mahbharata are the main deities at Dharmaraya temple. 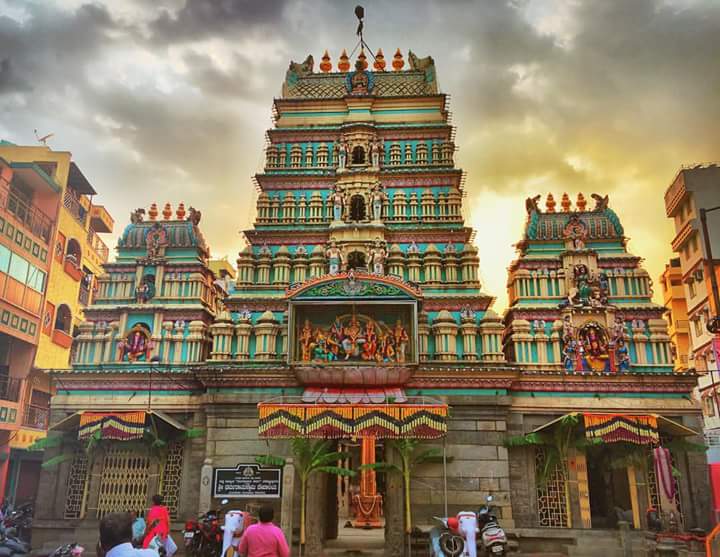 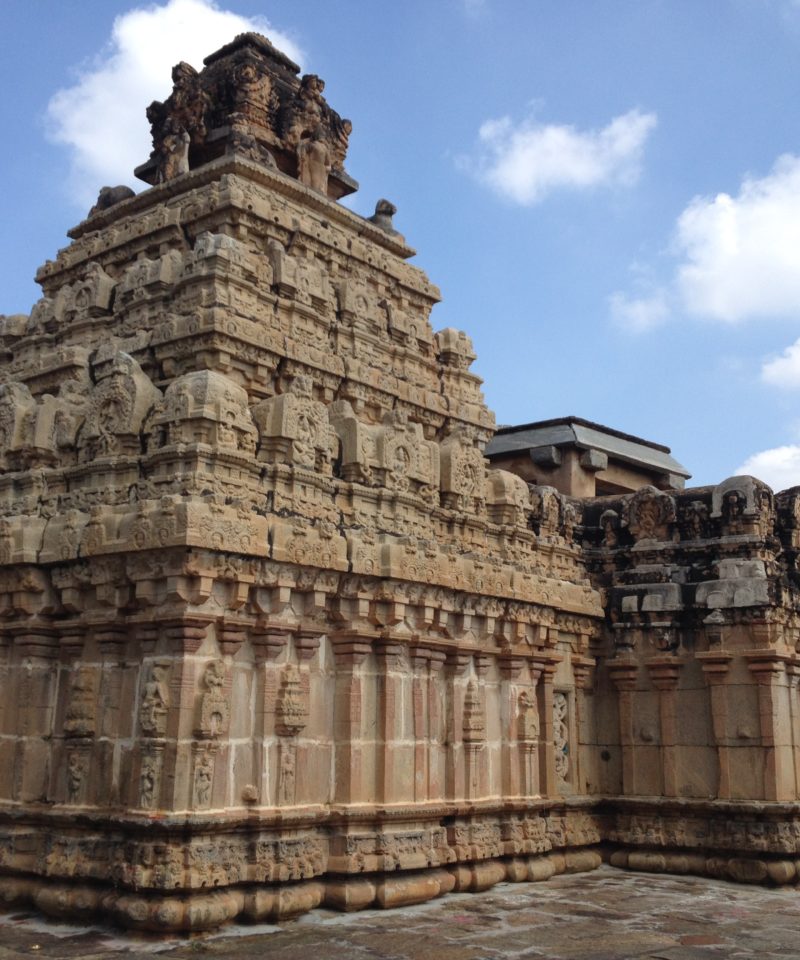 Situated on the outskirts of Bengaluru and at the base of Nandi hills, Bhoganandeeshwara temple is dedicated to Shiva and is a magnificent example of Dravidian architecture. This 1000-year-old temple bears the architectural stamps of five different dynasties that ruled here from the 9th century until 13th century. The Bhoga Nandeeshwara temple houses three shrines, Arunachaleshwara, Uma Maheshwara and Bhoga Nandeeshwara, which represent the various stages of the life of Shiva.

Want to hear more interesting stories of the Bhoganandishwara and the many gods? Join Unventured on our ‘Treasures of Nandi’ Bike or Hike tour

Amidst the bustling streets of Malleshwaram, stands the colourful Kadu Malleshwara temple dedicated to Shiva. Built in the 17th century by the Maratha king, Venkoji, the temple displays a typical Dravidian architecture. 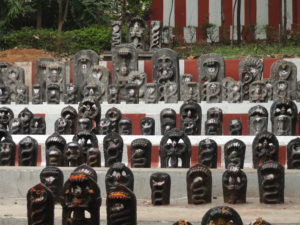 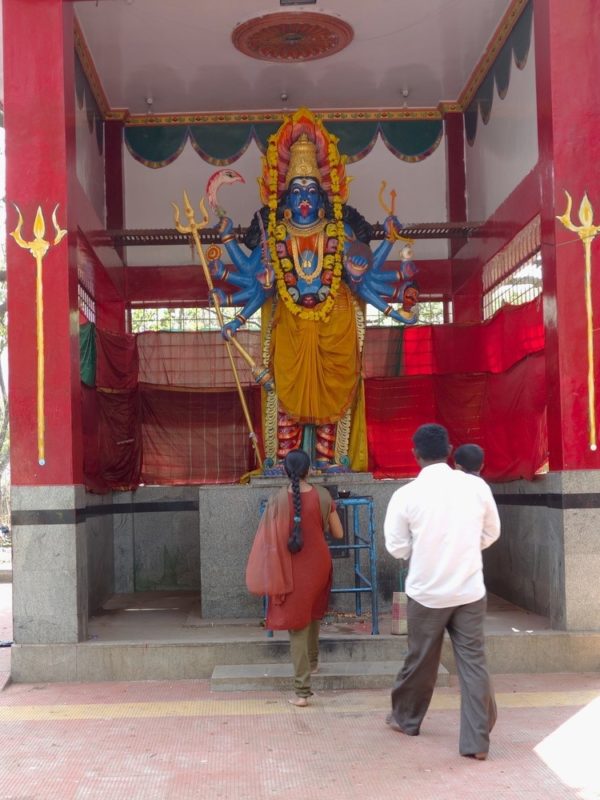 Goddess Kali is the embodiment of feminine energy and is always represented in a fearful form. While most of the temples in the city focuses on glorious architectural display, Kali temple dedicated to Goddess Kali, and urban legends have it that the temple is known for deliverance from black magic and voodoo practices. Located inside a Hindu burial ground, the temple was built by people from the lower communities a hundred years ago. The priests are surprisingly women, and the customs that they follow are quite interesting and different from other temples.

Bengaluru often keeps switching from being referred to as the ‘Silicon Valley of India’ to ‘Garden City of India’ to ‘Pub Capital of India’. However, the city took a few centuries to get those taglines, and was shaped over the years by various dynasties that ruled this region, with temples playing a huge role. The above temples are a great way to understand how Bengaluru has evolved over centuries and how they still hold the city and its people together despite the radical changes it has witnessed.